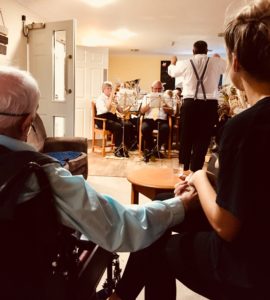 William Issac, known as Colston, recently celebrated his 90th birthday at our Devon Nursing Home, and was joined for a performance by the Holsworthy Brass band, whom Colston was a valued cornet player with for 72 years!

Colston joined the band in 1945 and devotedly played with them until October 2017. This is an impressive feat and inspired further questions; hence my eagerness to sit with Colston and hear all his fascinating stories.

He fondly recalled how he started out on his musical journey when his father was approached by the president of the band, asking if Colston would like to learn the cornet. He had already mastered the piano, therefore it was evident Colston had a musical ear. Colston happily recalls that his response was ‘I’ll give it a go!’ and part of the band’s history was made.

Colston truly enjoys reminiscing back to his band days, when they would play at village fetes and local music events even Hatherleigh Carnival in its’ heyday. It actually brought a tear to his eye when he thought back to all the fun times with his bandmates over the years. His excitement shines through, especially when telling stories of looking out into the audience and seeing the crowd’s reaction to their music.

His final performance with the band was in late 2017 at the glorious age of 88 years old, or as Colston put it, ‘88 years young!’ Although due to his health he is no longer able to play, music remains central to his heart, “what’s life without music!”

When I asked Colston if he had a favourite song to listen to or play, he simply replied “I just love all of them, they’re all brilliant!” His enthusiasm and fondness for music is contagious and you can’t help but smile along with him.

The band are consistently a resounding success at Hatherleigh, visiting often, with many family members enjoying their music. It is always a happy, emotional occasion for Colston and his family when the band visits. Memories which will be remembered for a long time to come.