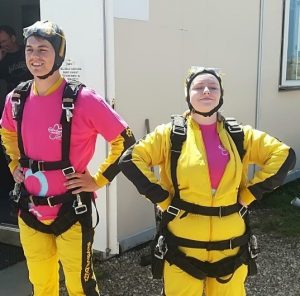 Two of the marketing team from our Devon Nursing Home, Hatherleigh, have just raised around £1000 for the Alzheimer’s Society in two sponsored  parachute jumps. 65% of those being cared for at Hatherleigh live with dementia and Alzheimer’s is the most common cause of dementia among older adults.

Jessica Caine and Luke Barnett took to the sky on Sunday 5th August from Dunkeswell Airfield in Devon and jumped, each attached to their instructors.

Jessica had parachuted once before, and said the views were incredible, but it was Luke’s first jump. Prior to taking off, he admitted to being terrified of heights, preferring his feet planted firmly on the ground.  Shortly after landing he said “It was all over so quickly, I didn’t have time to be scared.”

They jumped from 15,000 feet, any higher would require oxygen tanks, and within seconds, they were plummeting downwards at 120mph, in a tandem jump, which is the easiest of all skydives. It requires only 30 minutes of training before jumping, each strapped to a British Parachute Association Tandem Instructor. Jessica and Luke said that jumping was a truly unforgettable experience, and a fantastic way to raise funds for their chosen charity.

They raised enough money to pay for 2 years’ worth of clinical trial drugs to search for an effective treatment for vascular dementia. Speaking afterwards, they said the day was a total success for both Hatherleigh Nursing Home, and for Alzheimer’s Society.

There is a sport called Banzai Skydiving. You throw the parachute out of the airplane first and then jump out after it and put it on whilst freefalling. The world-record wait before jumping out is 50 seconds!

Afraid of flying, Muhammad Ali spent his first flight praying with a parachute strapped to his back. He was heading to Rome