A Master of Floral Design

The art of horticulture is supporting the journey of life, growing from seed or sprout, nurturing with water, weeding, and pruning through to full blossom, and arranging in such an elegant way to highlight the natural beauty.

Hatherleigh Nursing Home is home to Phillis Kirton, who has mastered the art of floral design winning a highly prestigious silver medal at the world-renown Chelsea Flower Show in 1997.

Her passion and expansive knowledge of flora also led Phillis to qualify as a speaker who would teach and demonstrate at National Association of Flower Arrangement Societies (NAFAS).

97 years young Phillis found her passion while spending warm days tending to her garden in the family home in Nottingham where she lived with her late husband Norman, and two children David and Gill.

During World War II, Phillis volunteered for the Women’s Land Army and worked on a farm in Cheshire. “It was hard work, but she enjoyed the fun and friendship with the other Land Girls,” her daughter Gill recalled.

It was while she was in the Land Army, that she signed up with the British Red Cross and helped at a local convalescent home for the WWII returning soldiers.

There she met Norman Linney Kirton who had returned from Burma and Northern Africa suffering from Malaria, and who, in September 1947, she married. They welcomed their son David into the world in 1951 followed by their daughter Gill in 1953.

She and Norman always enjoyed gardening together and her daughter Gill shared how the time spent amongst beautiful blooms in her back garden with Norman stemmed into the love of a lifetime.

“Phillis learnt, then taught, then demonstrated, and judged. But her greatest achievement, alongside her long-time friend Carolyn, was at the Chelsea Flower Show in 1997. She never did anything by halves!!”

“She had a fondness for sunflowers and snowdrops, one of the earliest flowers to appear in the spring. Roses of all shapes and sizes were among her favourites too.” Gill said. 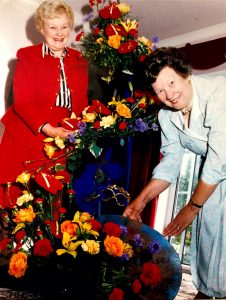 In 1978, she joined the Nottingham Flower Club and was joined by her friend, and future Chelsea Flower Show silver medal winning partner Carolyn two years later in 1980.

“As a qualified speaker she gave several different talks, but the one I remember most was an excellent talk on Sunflowers which was very popular with the Flower Clubs. She was also the Speakers representative for the area for a number of years, training other Speakers for their qualifications. She had her lovely talent for painting flowers. We always got on very well as friends. She is a very caring person & always very supportive to me,” Carolyn said.

In 1997 Phillis and Carolyn were invited to appear at the Royal Horticultural Society (RHS) Chelsea Flower Show. Representing the Nottingham Flower Club, their creation was titled ‘Chelsea Arts Ball’, and depicted ‘Chelsea Life’.

It was proudly displayed in front of the 100,000 plus attendees in London and their floral masterpiece’s elegance and character saw them awarded their prestigious silver medal.

Two years later, Phillis was once again in the capital, invited to an event of even higher grandeur than that of the Chelsea Flower Show.

Norman and Phillis were invited to attend the Queen’s garden party at Buckingham Palace to celebrate the Royals 50th wedding anniversary as Phillis and Norman celebrated their own golden anniversary! Understandably Phillis was thrilled.

“They were one of the lucky couples to be chosen, she was very excited about it and felt it a great honour,” Carolyn said.

Phillis continued to channel her passion for flora into the Nottingham Flower Club in the following years, becoming vice chair to Carol before being elected chairperson herself.

She was honoured for 40 years of service to the club in 2018. At the time of her award, Phillis had started her journey with dementia, and before Christmas of 2018 she moved to Devon to live at Hatherleigh Nursing Home.

Spring and summer at Hatherleigh reveal beautiful blooms and the luscious greenery of the surrounding Devon countryside. The Hatherleigh garden is a beautiful place to bask in the glorious sunshine and the surrounding shrubs. Inside the home, there are often flowers adorning the interior.

While there may be some elements of gardening and flower arranging that Phillis may find more difficult as she is on her journey with dementia, she is still found tending to and connecting with the flora around the home. The ever-changing foliage stimulates all the senses with different smells, colours, textures, sounds, and tastes allowing for opportunities to reminisce and reconnect with her lifetime passion.

As we enter the warmer months Phillis’s eye for floral beauty and her ability to nurture beautiful blossoms is something everyone is excited to see enriching Hatherleigh Nursing Home.